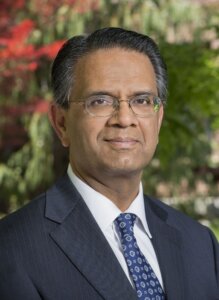 The Coalition of EPSCoR/IDeA States provides leadership and advocacy at the national level for its membership of 25 states and three territories. With the support of Van Scoyoc Associates, a federal affairs agency, the Coalition works to address the continued opportunity to promote the importance of a vibrant, nationwide science and technology enterprise and to bolster federal research and development grants to underfunded states, including Nevada.

Mridul Gautam, Ph.D., Vice President for Research and Innovation and Professor of Mechanical Engineering at the University of Nevada, Reno, was appointed to the Coalition’s Board of Directors in 2014. In 2021, Dr. Gautam’s peers elected him to serve as Chair of the Coalition’s Board of Directors and its executive committee, further strengthening Nevada’s voice and representation in national discussions. Dr. Gautam continues in this role into 2023.

“It’s an important and dynamic time for the Coalition of EPSCoR/IDeA States,” said Dr. Gautam. “National and international matters are prompting new interest in the role of science and technology as foundations for our country’s health, sustainability and place in the world. This is a time for vision and advocacy at the federal level. Our nation has built impressive research strengths centered in certain regions, and we now have the opportunity to take this nationwide with strengthened research expertise and infrastructure in every state.”

“[Dr. Gautam’s] dedication to ensuring strong, successful EPSCoR/IDeA programs will continue to help our community seize new opportunities and meet challenges head on,” said Stu Van Scoyoc, President & CEO of Van Scoyoc Associates. The EPSCoR/IDeA Foundation is a national non-profit that promotes the science and technology enterprise through improving university research infrastructure and increasing research competitiveness among historically underfunded states. This work happens within a complicated landscape involving six federal agencies that award research funding. The EPSCoR/IDeA Foundation and the Coalition of EPSCoR/IDeA States are separate organizations, but close collaborators. The Coalition might be described as the Foundation’s eyes and ears within the states.

“[The Coalition] helps us collect the best data possible and communicate impact,” said Jessica Molesworth, Executive Director of the EPSCoR/IDeA Foundation. “We want these programs to be as beneficial as possible and we want them to be working as well as possible. Understanding what is being accomplished in the [EPSCoR/IDeA] states allows us to determine priorities and funding targets, and develop effective, consistent promotion. The EPSCoR/IDeA Coalition Board of Directors has a dynamic chair in Mridul Gautam,” said Molesworth. “Dr. Gautam will undoubtedly lead the Coalition to new heights. The EPSCoR/IDeA Foundation appreciates working with Dr. Gautam and the Coalition on joint initiatives.”

Dr. Gautam is a Fellow of the National Academy of Public Administration and a member of the National Academies’ Government-University-Industry Research Roundtable, and he serves on additional boards and committees including the Association of Public and Land-Grant Universities’ Commission on Economic and Community Engagement. Under his leadership, Research & Innovation at the University of Nevada, Reno provides high quality services and infrastructure to enable faculty, students and staff to excel in their research, scholarly and creative endeavors and to advance innovation and commercialization. The division is committed to facilitating connections with industry and fostering regional entrepreneurship and collaboration through an innovative ecosystem, anchored by the Nevada Center for Applied Research and the University of Nevada, Reno Innevation Center.

See the recent news for the NSF and NASA EPSCoR programs.